One week ago a former Cambridgeshire police officer was caught up in last Monday’s earthquake in New Zealand. She has been telling me about her experience.

Heather Wilson, previously a Detective Constable based in Huntingdon, has felt many minor quakes since moving to New Zealand in 2004. But Monday’s was the worst she has encountered. 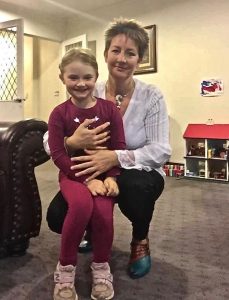 “I woke up and thought to myself, ‘Oh no, not an earthquake at this time of night’. And then, ‘Bang!’ it hit,” said the forty-seven year old mother.

“The house started to shake. Some people describe it as a rolling feeling. The shake got more and more intense as the seconds passed. There was then a hesitation, like the earthquake was taking a big breath in, then, it delivered it full pelt.”

The earthquake, now graded 7.8 in magnitude, ripped through New Zealand shortly after midnight. Two people died and homes, roads and infrastructure suffered millions of pounds worth of damage in the most affected area, around the town of Kaikoura on South Island.

Once the earthquake began, Heather leapt out of bed to go to her daughter Isabelle.

“For me, and I have to thank a bit of my police training, you just go in to automatic. You forget about ‘you’ and just think about what your responsibilities and priorities are,” she said.

“I was trying to run down the corridor to Isy’s room and not doing very well. I bounced off the walls a few times.

“The house made noises. As the quake went through there was a loud noise outside. It’s not a noise you hear on a regular basis; it’s like a loud train going past, or a helicopter passing. Things fell off the kitchen work surface and pictures on the wall swung.

“Isy was awake by the time I got to her.”

Heather also shouted to her lodger to get up and get herself into the lounge. They followed advice by staying in the most open room, close to the largest items of furniture.

“My heart was absolutely thumping as a ran down there. I have been in a big quake before but not as big as this one.

“You just think of the responsibility that you have got. It is to my daughter first before anyone else. She is only five, and although they are taught very well, she would have panicked had I not been there.”

She described needing to use torchlight due to a power failure to check that the emergency supplies bag was to hand.

Thankful for her mobile phone, she texted to check on family and then went online to GeoNet, a government funded project set up to monitor and obtain data about seismographic movement.

“I checked where the epicentre was, because if we were the epicentre, that would probably mean we were in big trouble, and leaving the house would not be wise. Power cables could be down and the road ripped up.”

Carterton, where Heather Wilson lives, is an hour’s drive from Wellington on North Island and away from the area of greatest damage.

We sat and planned what we were going to do should something else happen.”

Aftershocks have continued since the initial quake with approximately 1500 having been recorded. Another significant tremor measuring 6.0 occurred at 0915 (BST) on Wednesday, and seismologists and geophysicists are working to understand what has happened in order to predict what may happen in the future.

The Director of GeoNet, Dr. Ken Gledhill, posted a message on its website to all New Zealanders. He said:

“It was a monster quake, one that has shocked us all with its intensity and ferocity. Because of its size it made our world shake strongly but relatively slowly for a very long time. It is a complex, brooding beast we are still trying to understand.”

Heather Wilson has adjusting to living with the fear of earthquakes but it took time. The period after a big event is always a nervous time.

“It is only when you get a big one like this that some of us start to get jittery and jumpy. That’s because through history it is known that a bigger one does follow in time. Sometimes it is quite quickly, like with Christchurch it was a month later. And it is still early days.”

Although aftershocks continue, she is philosophical:

“It’s like anything else in life, after a while you become blasé. It is fair to say that you do have to carry on and you don’t tend to think when the next one is due because you just never know.

New Zealand suffers thousands of earthquakes each year. Most are in the 2.0 magnitude range and cause little or no damage. But large quakes are common.