I must confess to a rather boyish excitement as I arrived in Ramsgate yesterday. Work took me there, you understand, but the pleasure of another arrival in this famous Kent seaside town was undiminished. I was there to meet Harbour Master Robert Brown, the man in charge of Ramsgate’s historic Royal Harbour, who was going to show me around the Port Control office to assist in my research for……………well, that is another story.

The East Anglian traveller tends to choose the Norfolk or Suffolk coast for a day trip: Hunstanton, Wells-next-the-sea, Southwold, Aldeburgh and Felixstowe are all popular destinations. 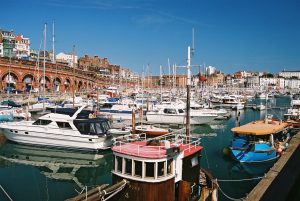 But, with a simple direct route: M11, M25, A2, M2 and A299, Ramsgate is a two hour run from Cambridge and is well worth a visit. If travelling by car, it is important to remember that the toll at the Dartford Crossing (currently £2.50 per crossing) must now be paid on-line; there are no toll booths left at the bridge or the tunnel.

Car parking in Ramsgate is plentiful, and rates reasonable, although free street parking can be found in exchange for a short walk in to town or down to the harbour. I parked on the east side of the harbour, in Wellington Crescent, high on the cliff line overlooking the seafront and Pegwell Bay. On a clear day France can be seen from here.

The town’s fortunes in recent years have been mixed. Recession; European immigration; fishing quotas and cheaper and cheaper flights have all had an effect on the town’s economy and identity. But walking in the town’s main shopping streets, High Street and Harbour Street, there is a clear sense that Ramsgate is on the up: a new wealth has come to the town. 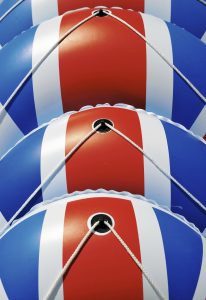 With London St. Pancras station only one and a quarter hours away, and journey times set to fall when the new Parkway station is built, Ramsgate and the Thanet coast are commuter country.

The signs of growth are all around: substantial housing development; the huge Westwood Cross Shopping Centre, linking Ramsgate with Broadstairs, and, perhaps more importantly from the tourist’s perspective, the proliferation of quality places to dine.

Sure, Ramsgate has its Fish and Chip shops, Greasy Spoons and burger bars, but around the harbour, in Harbour Street, Harbour Parade and Military Road a range of quality bars, cafes and restaurants provide the traveller with the choice of Italian, English, Mediterranean, Indian, Chinese and Greek food. On a hot summer’s day or evening, when dining al fresco at the harbour side, it is easy to think that you are in Southern Europe not on the Kent coast.

Ramsgate’s harbour dominates the seafront. It was given the title Royal Harbour, (the only Royal Harbour in the United Kingdom), by George IV in 1821, and now hosts a 700-berth marina, a fishing fleet, various commercial vessels associated with the offshore wind industry and a thriving commercial port. Yet, it is Ramsgate’s fascinating maritime history that is, arguably, the harbour’s greatest asset.

The Sailors’ Church, founded in 1878, The Ramsgate Home For Smack Boys, built in 1881, The Maritime Museum, housed in The Clock House on the quayside, all located around the harbour, convey a real sense of the town’s nautical past. Its place in naval history is guaranteed by the important part Ramsgate played in Operation Dynamo, the evacuation of the British Expeditionary Force from the beaches of Dunkirk in 1940.

Perhaps the most famous resident of Ramsgate Harbour is the motor yacht Sundowner; a Dunkirk Little Ship now fully restored and enjoying the glory she so richly deserves. Simply looking at her, afloat in the Royal Harbour, and wondering what it must have been like to sail into war to save an army, cannot fail to stir emotions.

Ramsgate is one of my favourite sailing destinations; we have sailed there many times. Sitting with a beer outside The Oak Hotel at the harbour side, basking in the sunshine with our boat nestled in the marina below has been the highlight of many a summer. But, a trip to Ramsgate by car for a day or two is very much worth a place on any tourist’s or traveller’s agenda.