In the night of 31st January 1953 a storm surge along the UK’s east coast led to the loss of 327 lives. The East Coast is presently bracing itself against a surge, but what exactly are these meteorological demons and how are they caused?

A storm surge, otherwise known as a tidal surge, is one of the most destructive natural phenomena to affect the United Kingdom. The devastation and deaths caused in 1953 were avoided on 5th December 2013, the last big surge, largely due to vastly improved sea defences and advances in warning systems.

Although the consequences of the 1953 and 2013 surges were very different the elements that Mother Nature combines to cause a storm surge remain the same. It begins with the Moon.

The moon stays in orbit around the earth due to the gravitational pull of each. But the water on the earth’s surface is pulled towards the moon by its gravity.

The Moon moves around the earth every 24 hours causing the twice-daily high and low waters evident around the UK coast, (the high tides being at points on the earth’s surface closest to and furthest from the Moon).

The Sun’s gravity also has an effect on our seas. Its gravitational pull is about 45% that of the moon. 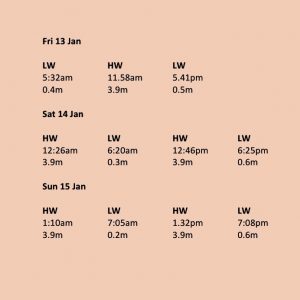 Consequently, twice a month, around New Moon and Full Moon, the gravity of the Moon and the Sun are pulling with each other. This causes bigger tides, known as Spring Tides. For the rest of the month, the Sun and the Moon are working against each other causing lower tides. These are known as Neap Tides.

Other astronomical patterns also influence the tides. The biggest Spring Tides occur in March and September. These are known as Equinoctial Tides.

Given that the tides are regular meteorological occurrences the times of high tide and the height of that tide are accurately predictable. The table (right) shows the times and heights of tides for the next few days at Felixstowe.

The earth’s surface is surrounded by air, known as the atmosphere. That air exerts pressure on everything in contact with it (atmospheric pressure).

The British weather is mainly influenced by a series of depressions; systems of low pressure that sweep across the country, typically from the Atlantic. These tend to bring windy and rainy weather.

Areas of high pressure, commonly associated with more settled fair weather, exert far greater pressure on the earth’s surface. This pressure presses down on the seas creating resistance to the water being pulled towards the moon. This results in lower tides.

When low pressure prevails the sea has less resisting its rise, and consequently a tide is able to rise higher than when high pressure dominates. 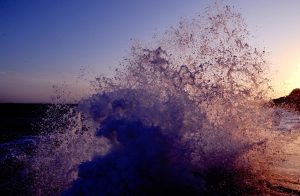 So an Easterly wind blows the sea in a westerly direction, and in the case of the North Sea, this means towards the UK’s east coast.

Storm surges occur when the wind and low pressure combine to produce tides higher than predicted. The amount of recent rainfall can also influence the surge as can the action of waves near the shoreline.

But sea defences and low-lying communities are at risk when all other factors combine with a high Spring Tide. The impact of a storm surge can be devastating.

The surge of 1953 killed 1836 in the Netherlands. In edition to England’s east coast, Scotland and Belgium were also affected. Of those who died in the UK, 38 were in Felixstowe, 37 in Jaywick and 58 at Canvey Island. It remains one of the UK’s worst natural disasters.

Further afield, a tidal surge in the Bay of Benghal in 1970, caused by the Bhola cyclone, killed an estimated 500,000 people along the Indian and East Pakistan (now Bangladesh) coast.

More recently, in 2013, Typhoon Yolanda killed an estimated 6000 in the Phillippine Islands.

More information about tides and storm surges, together with the latest weather warnings, can be found on the Met Office website: www.metoffice.gov.uk