Is the selfie just innocuous fun, or underneath, is more harm than good being caused by our desire to put ourselves in the shot?

“Good job I have forgotten my selfie-stick,” I said, tongue firmly embedded in my cheek, when an airport check-in clerk pointed out my camera bag was 4 kilograms overweight.

I do not have a selfie-stick and will never buy one. I am, perhaps, alone in thinking that the device is the world’s most pointless invention.

I was 14 years old when I got my first camera. I have learnt a little bit about photography since then, most importantly, to stand behind the camera and point it away from me.

This way I get photographs of the places I go, the people I see and the experiences I have.

The great things you see

The Box Brownie of the 1900s proliferated the technique although self-portraits in those days were taken with the aid of a mirror. It would be some time before self-timers arrived.

Yet it was not until the new millennium that the self-portrait became commonplace; inevitably it was the internet that created this new phenomenon.

The first self-portraits began to be uploaded onto the internet in 2001, albeit from cameras rather than smartphones. In 2002 the word ‘selfie’ was born.

The demise of MySpace in favour of the more popular Facebook opened the floodgates. The internet became the platform on which Millennials could show the world pictures of themselves going about their travels and their daily lives.

Within the blinking of an eye the world of citizen photography had arrived. The camera gave way to the smartphone, the photographic print was on the brink of extinction. Social media was what it was all about.

Yesterday, on Safer Internet Day, Newsround revealed that its research this year showed concerns about one specific aspect of online activity. 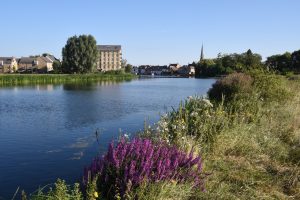 Pointing the camera away from me

“When it comes to selfies,” said Newsround presenter, Ricky Boleto, to BBC Breakfast, “the big thing we found this year is that there is an awful lot of pressure on young people to look good.

“Something like 4 in 5 children said they want to look good in their selfies, and they take on average…4 pictures before they post the right one.”

The desire to gain high numbers of likes (the currency of popularity these days) and the innocent misunderstanding that the world of celebrity, and the selfies posted by celebrities, is a reflection of the real world, are key factors in this mounting pressure.

Newsround research reveals that the use of editing filters is “incredibly important” as youngsters worry “about their spots, their appearance and things like that.”

Ricky Boleto no doubt speaks for us all: “..but this is something that 11 and 12-year olds shouldn’t be worrying about at such a young age, and that’s what’s a bit disturbing.”

But the selfie phenomenon poses another threat, not as ‘disturbing’ as the damage to a child’s wellbeing, but worrying none-the-less.

If we accept the general premise that our youngsters’ social media onlookers are interested in seeing what they are doing and where they are, should we not question whether they need to see each other in their photographs?

The subject of these photographs has become the taker, whilst the location or event is relegated to the background. The self-portrait has taken over from the journal.

For some young people, the wish to show friends where they are and share the experiences they have had, has been replaced by a desire, or worse, a pressured need, to see or show themselves in the shot.

Photographs are so much better when the taker of a picture points the camera away from them rather than towards them; when they capture great scenes, great people, or great events.

From hoola-hoop to ice-bucket challenge, there have been many passing crazes over the years. Artistically, the world will be a better place if the selfie is just one of them; if today’s Newsround audience’s creative limits go on much further than pointing a camera inward to capture ‘Me at…………’, ‘Me with…… ’, or just ‘Me’.