Tranquil, relaxing and quintessentially British, a holiday on the Norfolk Broads has been the pleasure of the tourist for over a century. With growing evidence that holidaymakers are looking at alternatives to beach holidays in distant locations, is there a rise in the number seeking a boating experience on the Broads?

And is the hire boat industry, part of the region’s £600 million leisure economy, equipped to attract a new breed of customer?

Last December, the travel agents’ association ABTA predicted, in its Travel Trends report, that: “With uncertainty around Brexit and currency fluctuations expected to continue throughout 2017, it seems likely that domestic tourism may see a boost next year.”

It said that some resorts in the Western Mediterranean were stretched to capacity due to security concerns in Tunisia, Turkey and Sharm el Shiek, and that it was difficult to predict what will happen to bookings this year. 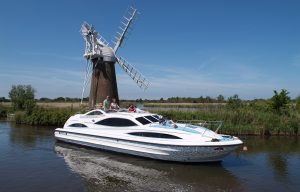 The motorboat hire industry on the Norfolk Broads emerged in the years leading up to the First World War. It flourished in the nineteen-sixties as more cost-effective and lower maintenance fibreglass boats replaced traditional wooden cruisers.

With two large booking agencies, Blakes and Hoseasons, marketing both the boating holiday as a product and the Broads as a destination, investment and expansion meant that by the nineteen-eighties, 2300 motor cruiser hire boats were registered on the waterway. 60 boatyards made up the hire fleet.

Michael Whitaker, a partner in Herbert Woods boatyard and hire boat operator at Potter Higham, says the Herbert Woods fleet, although trading under a different name, was at its biggest in the seventies and was operating from a number of bases on the Broads.

“The industry, certainly through the nineteen-seventies, grew very, very fast. A lot of companies jumped on the bandwagon and put hundreds and hundreds of boats into the fleet.” 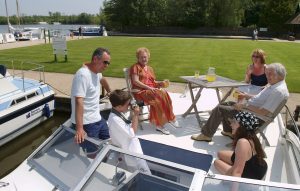 But that growth could not be supported as a new threat emerged: “The whole growth of package holidays, and ultimately cheap flights, changed that industry dramatically,” he says.

By 1994 the number of hire cruisers had fallen to 1522 and by the turn of the century two hundred more had gone. The proliferation of new destinations abroad coupled with falling holiday prices were taking their toll.

John Packman has been the Chief Executive of The Broads Authority (the body responsible for the licensing of craft on the waterway) since 2001. He says the fall in number of hire boats continues. There were 789 registered craft in 2016, just 35% of the number in the industry’s heyday. But, he says the numbers have to be put into context:

“So typically, some of the larger yards are investing in rather spanking new expensive boats and perhaps putting one boat in for every two they take out.

“If you are the Broads Authority and relying on income, actually this decline is not very helpful to us, but if it is a function of the modernisation of the fleet you can see it much more positively.”

Michael Whitaker operates 128 boats in Herbert Woods’ fleet and believes the industry on a journey of modernization embracing new ideas and methods. He says there has been a significant rationalisation in the number of yards for economic reasons:

“We have to get the benefits of scale in an operation like this, so the number of boatyards that are operated with less than 20 boats is very, very small now.”

He believes the larger yards do reasonably well, but have to invest “huge amounts of money”.

Despite number of boatyards having reduced substantially – just 16 motor cruiser hire boat operators remain, and the largest four operators account for 588 of the 789 registered craft – the Broads hire boat industry is enjoying a period of growth. Operators report an increase in the number of bookings taken and steady increases in the average number of weeks that a vessel is hired out each year.

Matt Alderton, senior brand manager, responsible for Hoseasons’ boating programme, says that since 2012 there has been “a seismic shift in people holidaying in the UK”. As well as the regular boating holidaymaker, he says there is a new visitor to the waterway.

“We have seen a definite rise in people using the Broads as a short break destination, whereas traditionally a boating holiday was a one or two-week summer [holiday]. I think that has played a part of bringing a new audience in, who just want a short break and a short experience.”

But those new customers expect the experience to be something more than camping afloat. As one operator puts it, “they want everything they have at home, and more.”

Mr. Alderton says: “We have definitely seen a recent change, in people demanding bigger and certainly more luxurious boats. The quality element overall has been an important factor, because we have certainly seen, in the last few seasons, people investing across the board, not just the larger [operators].” 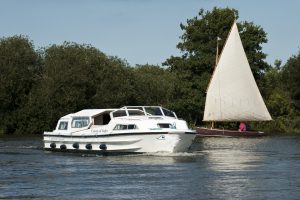 Whilst the numbers taking a boating holiday on the Broads is increasing, no single reason stands out. The hire boat industry has modernised, and new customers are trying the boating experience for the first time.

Customer feedback to some operators suggests that security concerns abroad are a factor in the upward trend. Also, the falling value of the pound against the Euro is making the Broads holiday look better value against one in Europe.

“There were an awful lot of people that had concerns about security. But also, the travelling time, the hassle of airports and all the rest of it, and a lot of them tried the UK in 2016 that perhaps had not done before.”

The Broads Authority, the hire boat industry and the wider tourism organisations have identified the opportunities and see the adoption of the term The Broads National Park in 2016 as an important step in bringing the area to the attention of a new generation.

Greg Munford, chairman of Broads Tourism and chief executive of Richardson’s boatyard, a hire fleet of 310 craft is “buoyed” by the number of businesses willing to engage in enhancing visitors’ experiences and promoting the area, not just their own businesses.

“We need to be shouting as loud as we can about The Broads National Park. Broads Tourism members are committed to making sure that everybody’s experience when they come to the Norfolk Broads is a great one.” He says the Broads is the quickest way to slow down and has “something for everyone”.

The Broads National Park hire boat industry has changed in recent years. Its customers’ expectations and habits have evolved. A hire boat holiday will always be a niche product and those in the industry will need to remain pro-active and innovative. But if the holiday can deliver a quality experience and great value, there will be a growing number of holidaymakers willing to try messing about on the water.