I will always remember Friday 4th August 2017. It was the day on which, for the first time, I was detained against my will.

To say that I was arrested would be an overstatement, and granted, my incarceration lasted only minutes. Nonetheless, from the moment an official grabbed me unceremoniously by the forearm, I was not a free man and was an unwilling cameo in a bizarre scene. 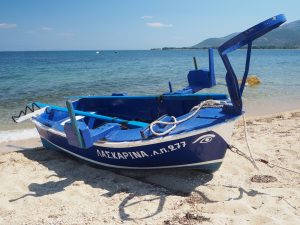 The harbour town of Prinos lies on the Northwest coast of Thassos, Greece’s northern-most island. Typically Hellenic, it is sleepy, charming, historic and has a friendly, welcoming population. It is both worthy of a visit and a provider of happy memories.

Along its waterfront, cafes, bars and a handful of hotel overlook a beach and a little harbour. A small port area accommodates ferries plying their trade between the island and the mainland port of Kavala a short distance across the water.

Whilst in this idyll, I took two photos of a ro-ro ferry awaiting departure.

I wanted to take a third, once the boat had pulled away from the quayside.

Ahead, four men stood on the quayside in the midday heat. Three were obviously ferry company employers. Two had been directing foot passengers and vehicles, whilst the third stood by the ropes in readiness for casting off.

He was unarmed, and though clearly not a policeman, I took him to be coastguard or a port official.

As I waited, Action Man looked in my direction and shouted something Greek. From 20 metres away I was uncertain whether he was talking to me. I was gripped by that dilemma of neither wanting the embarrassment of replying when his remark was addressed to someone around me, nor wanting to appear rude by failing to acknowledge him.

“I do not understand,” seemed the safest option.

Action Man did not respond; at least not initially. I too stayed where I was, hands full of camera, mind empty of thought.

With the gait of a man ravaged by severe hemorrhoids and the attitude of a man harbouring a lifetime’s resentment that his backside was six inches nearer the ground than he would have liked, this testosterone-fuelled government worker exploded at me like the devil himself.

Shouting mightily and strutting purposefully, he thrust out, grabbing my camera in an effort to pull it from my hands. He spoke no English words, but spoke Greek loudly and incomprehensibly.

What this great protector of the good had not bargained on was my camera being attached to my wrist by a lanyard. Said accessory was actually there to stop me dropping my little Olympus rather than as an anti-theft device, but it was doing a great job.

I offered no resistance, offered to untether myself (in English of course) and even let go of the camera completely, knowing it could not fall to the floor.

Action Man was stumped. What should he do now?

Explaining what was wrong politely in English might have been a good start, but I had the distinct impression that the unbreakable link between me and my camera was so unexpected that he had no choice but to abandon his script and ad lib, whatever the consequences.

A series of unfathomable actions then followed.

He took hold of my right forearm, and, still shouting in his native tongue, began pulling me the ten to fifteen metres to what I assumed was his office. No explanation was forthcoming

Ironically, at no point was I concerned. I was certainly not amused, but the events were very interesting. I had no fear, no anger nor any desire for retribution. I was just thinking ‘this is a great story’.

Once in his office, my captor slammed the door shut and continued to shout. Curiously, he then removed his sunglasses, and in a grand gesture, threw them aggressively onto a desk.

It was after several more seconds of near-demented ranting that he uttered his first English words: “Delete photos.”

“What is wrong?” I asked in simple English.

Now, most travellers know not to take photographs at, or close to, Greek military installations (which often includes civil airports), but in 17 years of visiting Greece I have never had a problem taking photographs of ferries. Certainly, there were no signs suggesting photography at the harbour was against the law.

“Delete photos! All photos!” he demanded again. “You can go to jail for two years for what you have done!”

Whilst I had no intention of increasing the risk of confrontation or prolonging detention, I was not about to give up 120 pictures of Greece’s Emerald Isle.

Rather than challenge his request, I quickly deleted the two ferry pictures from the camera (to which I remained physically if not emotionally attached).

I was again sensing that Action Man was so far off-piste that he was floundering. He needed an escape ladder and I had to find it for him. I released the lanyard and offered him the camera for him to check that there were no pictures that he did not like.

Stranger than anything that had gone before, he declined to look. I was bemused.

By now, his English appeared to be good. “Are you a tourist?” he asked.

As soon as I replied “Yes,” (although the straw hat, tee-shirt, shorts, flip-flops and pale skin might have been a giveaway) he opened the door, said I could go and concluded: “Have a good day.”

The incident was over as quickly and as oddly as it had begun.

I avoid describing myself as a Freelance Travel Writer. It can sound self-indulgent and pretentious without the credentials of the likes of Kerouac or Bryson.

But my detention felt almost like an initiation into the great travel writing fraternity, a rite of passage, the earning of my wings. Surely, only writers get detained, not tourists.

I still do not know what, if anything, I had done wrong. My subsequent enquiries have not enlightened me.

Happily though, my love of Greece, its islands and its people can stand the odd insane interlude. I will be back next year, a year older, perhaps none the wiser but a little more informed.

Informed in the sense of knowing that somewhere in the Aegean, on a hot fertile island, the under-height, over-zealous mind of officialdom is just as at home as it is in Blighty.

Or perhaps my story has little to do with authority and law enforcement. As Holly Baxter wrote in The Independent newspaper in February, albeit in an article about Donald Trump, not of our Greek Action Man: “Sometimes an arsehole is just an arsehole.”