In my latest blog I report on  the lesser-known Greek Island of Lefkada. Popular with the Greeks and European sailors, it remains unspoilt. It is well worth considering as a holiday destination by couples and families seeking the sun.

With Summer temperatures in the mid-thirties, uninterrupted sunshine and mediterranean food to die for, Lefkada is a pearl in the Ionian Sea. 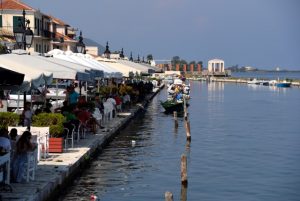 Also known as Lefkas, the municipality is 69 miles Southeast of Corfu on Greece’s west coast. It has a population of 24,000.

In ancient times Lefkada was a peninsula until the Corinthians separated it from the mainland in the seventh century BC by digging a canal.

Classical scholars, modern historians and some locals, keen to enhance the island’s reputation, believe Lefkada to be Homer’s Ithaca.

The northeastern corner of the island is mainly flat salt marshes. Otherwise, Lefkada rises up from sea level to mountains, the highest peak being Stavrota at 1182m.

The popularity of the island both to the Greeks and tourists is undoubted increased by its accessibility.

Unlike Cephalonia and Corfu, there are no flights to the island, but with the Aktion National Airport at Preveza only 40 minutes away and a floating bridge across the canal, the need for a tedious ferry crossing to it is removed.

Winds are generally light and northwesterly in the summer but strong katabatic winds develop locally in the afternoons. The southeast of the island is well known for watersports with Vasiliki being one of the best windsurfing destinations in Europe. 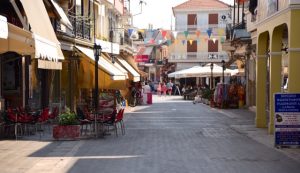 The island’s administrative centre and largest town is also called Lefkada. Often, holiday companies, websites and travel agents will refer to it as Lefkada Town, or Lefkas Town, to distinguish it from the island.

The town has a distinct style. Earthquakes devastated the area in 1948 and 1953. Many buildings have been built to be earthquake-proof.

Typically, ground floor structures are conventional brick or concrete, whereas first floors are made of corrugated metal around timber frames.

Rod Heikell, in his sailing guide, Ionian, describes it as: “a strange town, unlike any others in the area, looking like a Greek town that has taken onboard Third World architecture from somewhere like downtown Rio di Janero.”

Lefkada Town is however very Greek. It functions all year round and has a resident population that remains throughout the year. This is so often not the case on other Greek islands.

Most family holiday needs are catered for. The quayside promenade Dimitriou Golemi has several good restaurants for al fresco dining and the town centre, only a short walk from the seafront, has a good range of bars and cafes.

The west side of the town has excellent beaches, and at its northern tip the thirteenth century Santa Maura fort is worth a visit.

Gift shops, boutiques and small supermarkets are plentiful and there is the usual array of newsagents, chemists, bakers and delicatessens. 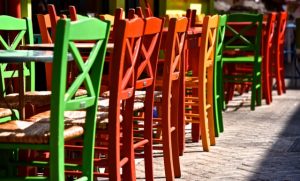 Hotels and Villas are located both in the town centre and further out, but most do not have a swimming pool. Ianos Hotel in the marina complex, only a short walk around the harbour from the town centre is an exception.

From Lefkada Town the rest of the island is easily accessible. Roads are generally reasonable, but as with all Greek island roads, a watchful eye for potholes is needed if travelling on two wheels. There are several car, quad-bike and scooter hire companies to chose from.

For those wanting a day by the sea, there are popular beaches at Porto Katsiki in the south-west and a cluster in the north-west around Agios Nikolaos. Each can be reached on a day trip from any part of the island.

The west coast is more rugged than the east with the prevailing wind coming in from the northwest. Remember, Greek Island beaches shelve rapidly and care needs to be taken.

The island’s main tourist destination is the coastal town of Nidri. This popular resort has restaurants, bars, cafés and nightlife for most tastes. Tripper boats run daily to the nearby island of Ithaca.

Nidri will forever be associated with Aristotle Onassis whose private island Skorpios lies just two miles east of the town. Onassis introduced drinkable mains water to Lefkada, the only Greek island to have this commodity. 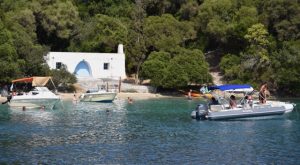 The shipping tycoon and businessman bought Skorpios for a reported £10,000 in 1962 and married former US first lady, Jackie Kennedy there six years later.

His body, and that of son Alexander and daughter Christina are buried on the island.

Although a regular visitor to the island it is said that Onassis never once slept on Skorpios, preferring instead to stay aboard his beloved and world-famous yacht Christina O.

The only surviving relative of the billionaire businessman, Athina Onassis Roussel, the daughter of Christina, caused controversy in 2013 when she sold the island to a Russian Oligarch.

According to The Telegraph, at a reputed price of $100 million, Skorpios was an “extravagant gift” to the buyer’s daughter.